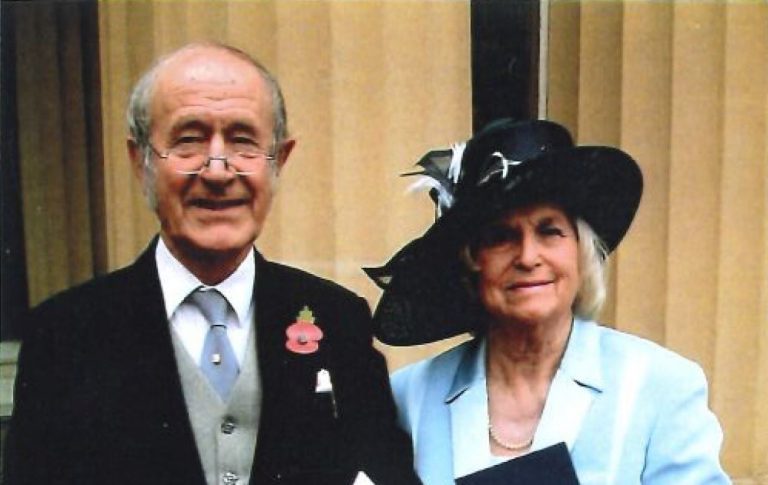 The Funeral and Service of Thanksgiving for the life of Dr Reg Britt was held recently. During the service Tim Jenns read this tribute from Dr Naveen Kakkar, CMC Ludhiana.

“What can you say about a man who helped so many, with such generosity, from Gerrards Cross to Ludhiana? The Christian Medical College and Hospital in Ludhiana became a second home for Reg for 2 or 3 months every year from 1976 till 2006, when he had to stop coming to take care of Dorothy, as her health declined.

He was my mentor, a source of inspiration and a father figure, all rolled into one. My first recollection of him was of an Englishman with his hair all over the place and a flowing white coat, who walked briskly into the haematology laboratory, came to the residents’ corner, where we were tapping away at manual blood cell counters, and said, “Slide session at 3.30p.m. tomorrow”.

At 3:30, he was there with the slide projector already focused on the wall. “Good afternoon. I am Reg Britt and we will now do some haematology together”. The rest is a blur but it was clear he was no ordinary man. Calm and composed even as we gave answers that qualified as massive blunders, as he explaining the right answer, not batting an eyelid and without an iota of annoyance. Reg did not teach me only about formal haematology, what I learnt by watching him was to be inquisitive and passionate about the subject.

At CMC, Reg used to attend ward rounds with consultants and give his input on a diagnostic approach or patient management. Often he would then go to the laboratory, make a blood smear of a patient’s blood and review the slide himself. Working for long hours in the laboratory alongside technicians, he taught them the nuances of haematology. Quality control was his obsession and it rubbed off on the technicians and residents he taught. He pioneered rigorous laboratory standardization procedures. His contribution to the development of haematology at CMC gave it a nationwide reputation in the subject.

He also initiated the field use of the WHO colour scale for haemoglobin in the hospital’s outreach centres. In 2000, the Indian Council for Medical Research approached Reg to take part in a nationwide thalassemia-screening project. The five-year project was a mammoth exercise and involved screening of 5000 antenatal women and 5000 college students.

He was a wonderful host while I was in London for 7 months’ work at the King’s College Hospital. He had arranged this trip for me through Friends of Ludhiana, where he was an active trustee. When my family came over for a month towards the end of my stint, he took us all to places of interest and made our stay extremely comfortable. Our exchanges did not stop. He would post me newspaper cuttings of news about India or developments in haematology. He continued to send copies of Journals over and even donated his microscope to the department.

An extremely humble and down to earth person, he never yearned for the limelight in spite of his valuable contributions, he liked to work behind the scenes, helping and touching the lives of people who came in contact with him. Here he is also remembered as a generous man, who gave away his belongings to helpers and technicians, as he was winding up last visit to CMC, especially welcome were his golf clubs and trusty moped!

Finally I will miss Reg’s voice when I phoned, he always began with “Ah……….Naveen”, and then we had a conversation full of news, always reflecting his pleasure to be in contact again!

He has left us now but I suspect that he may still be looking at blood smears in Heaven in perfect happiness.”