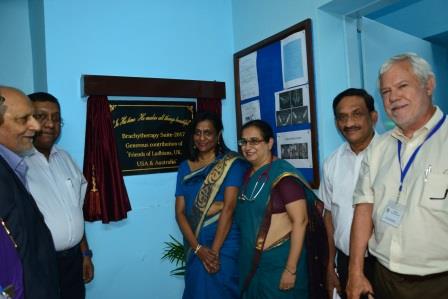 Dear Friends of Ludhiana, Christmas greetings to you all!

The year at CMC started with some difficulty.  As many readers will have heard, in November 2016 the Indian Government suddenly decided to withdraw all 1,000 and 500 Rupee notes. For a few weeks people were able to exchange their old notes at banks and this resulted in long queues outside the banks. When my wife and I visited in January 2017 it was obvious that in the major cities [such as Mumbai] there was rapid adjustment to the changes. However, I think that some of the poorer patients [such as in Ludhiana and its environs], who did not have bank accounts, ‘buried their heads in the sand’ and hoped that the problem would go away. They then found themselves left with a number of 1,000 and 500 Rupee notes ‘under their matresses’ which were completely worthless. This was reflected in a dramatic reduction in the number of patients attending out-patients or being admitted to CMC – so much of the payment for treatment at CMC and large parts of India is in cash and people with no available cash were not attending the hospital.

Some of the patients who did attend were assisted by the Good Samaritan Fund. This fund gives financial help to in-patients who are unable to completely fund their treatment at CMC. The Head of Department refers their case to a small committee at the hospital which vets their financial situation and then awards them up to 10,000 Rupees towards their hospital bill.  We have recently received an update on the use of the Good Samaritan Fund. Eighty patients were assisted during this past year and the Fund has proved so popular with the staff and patients that it is currently overspent – a situation which we intend to rectify before Christmas!

Last Christmas I made mention of the Brachytherapy equipment which has been largely funded by Friends of Ludhiana [£80,000]. I am pleased to say that the equipment has arrived and has been installed.  Staff have been trained in its use and the first patients were treated in October. I also mentioned in 2016 that while we were visiting last year it became obvious that there was a need for a new paediatric ventilator.  We presented this need to the congregation in our small country parish and an appeal raised sufficient to purchase a new paediatric ventilator [approximately £10,000].  This has yet to be purchased but we hope this will happen shortly.

During 2017 we helped facilitate the visit of a Dental student to Ludhiana for her elective studies. Josie thoroughly enjoyed her time at CMC and [if you have not read it already] her blog of the visit is on our web-site and it is an informative and inspiring read.

Friends of Ludhiana now have no paid employees and the work of the charity is done by Trustees who are all volunteers. This does mean that virtually all our income from donors can be transferred to CMC for the treatment of patients. I am so grateful to our Trustees who willingly give of their time and talents in supporting the charity.

Thank you again to you, our supporters – in this day and age, giving to a charity which entirely supports a hospital in India is not considered a popular option. However, CMC Ludhiana remains a beacon for Jesus in the Punjab and the work of the hospital clearly demonstrates His love and concern for the poor and disadvantaged. Happy Christmas to you all.