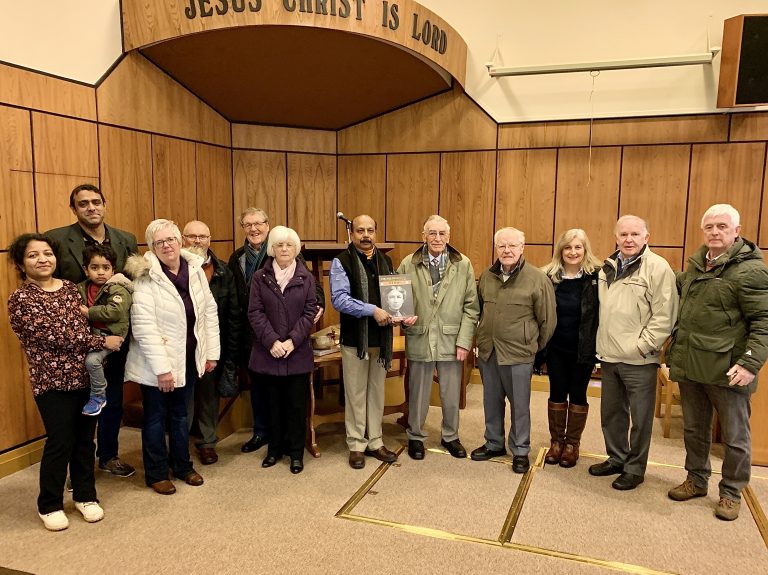 Dr William Bhatti, Director of Dr Edith Brown’s hospital in Ludhiana, visits Whitehaven to see the place where she was born.
The photograph by Phil Lewthwaite shows his father Frank, a supporter of CMC Ludhiana and the legacy of Dr Edith Brown for many years, in the church holding his commemorative book and flanked by Dr Bhatti on the left and Norman Walkingshaw on the right.
One of the highlights of Dr Bhatti’s recent visit to UK was a day spent in Whitehaven. Dr Bhatti expressed a wish to see Dr Dame Edith Brown’s birthplace, and Friends of Ludhiana turned out in force and the rain to show him around. He visited the Brethren Church where Edith Brown worshiped. Frank Lewthwaite and Norman Walkingshaw, church secretary were able to show him the church and tell him many stories about Dame Edith he had not previously known. Dr Bhatti presented them with signed copies of the book produced to commemorate the first 125 years of the Christian Medical College and Hospital Ludhiana.
Then the party moved on to Coates Lane, and the house where Edith Brown was born. The present owners kindly allowed the party inside and Dr Bhatti was able to climb the original staircase Edith Brown would have used.
The group moved on to Dixon’s café where they were delighted to receive a free lunch. When he learned George Washington’s grandmother was buried close to the church, Dr Bhatti rushed off to take a photograph of the grave before he left.