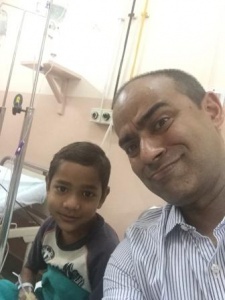 Dr. Dhruv Ghosh is one of the doctors at CMC who is particularly grateful to have access to the Friends of Ludhiana Good Samaritan Fund. The picture shows Dr. Dhruv himself with a very special little boy. The child was born with an open bladder and incompletely formed genitalia (Classical Bladder Exstrophy).

The initial surgery to correct this was carried out at CMC eight years ago, but the family were unable to return for the necessary follow up surgeries because they had no money. In India children with improperly formed genitalia are sometimes forcibly taken away from their parents by people claiming that as the children are neither male nor female, they do not belong to their parents.
The children are then castrated and forced into begging or prostitution. Society in India is changing and these age old customs are dying out, but not fast enough for this child’s father who has been fighting off people in his own village to be able to keep his son with him. Now with the help of the Good Samaritan Fund the first steps have been taken to make him socially acceptable. He will need more surgery and Dr. Dhruv hopes the money will be found somehow.

– President and Chairman: Dr Keith R Hine MD FRCP
– Honorary Treasurer: Mr Peter J Clark FCA FCMI
Friends of Ludhiana is a Company limited by guarantee registered in England and Wales with
Company no. 497421 and a Registered Charity no. 314148