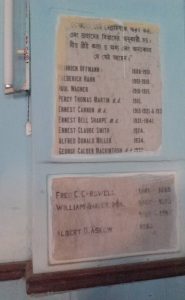 The picture shows Ted in Lohardaga in 2016

Ted was born in Bilaspur, British India, becoming the fourth generation of missionaries in India. In 2016 together with his daughter Mary Girard and cousin Wolfram Peetz he made a heritage tour to northern India to visit the places where his relatives had worked. Much of the tour is described in Mary Girard’s blog. Wolfram Peetz was looking forward to seeing Purulia where his mother was born.

On the 9th of February they went to visit a small town called Lohardaga about 1.5 hours drive west of Ranchi. This is where their ancestors Ferdinand and Doris Hahn lived for twenty years. However for the last ten years of Ferdinand’s life he lived and worked in the predominantly Santal region of Purulia, which is now in West Bengal.

The work among the leprosy sufferers in Purulia was started by Heinrich Uffman and his wife Catherine, also from the Gossner mission. As one of the Gossner Mission’s oldest and most able missionaries Rev. Ferdinand Hahn served in India for 42 years living in Purulia, Lohardaga, Chaibassa and Ranchi, and influencing several other smaller towns throughout Chotanagpur and Assam. He died in Mussoorie in the Himalayas where he had gone for recuperation. The plaque shows him as the second superintendent of Purulia leprosy home and hospital from 1901 – 1910

– President and Chairman: Dr Keith R Hine MD FRCP
– Honorary Treasurer: Mr Peter J Clark FCA FCMI
Friends of Ludhiana is a Company limited by guarantee registered in England and Wales with
Company no. 497421 and a Registered Charity no. 314148